Meticulous restoration of a Takapuna landmark 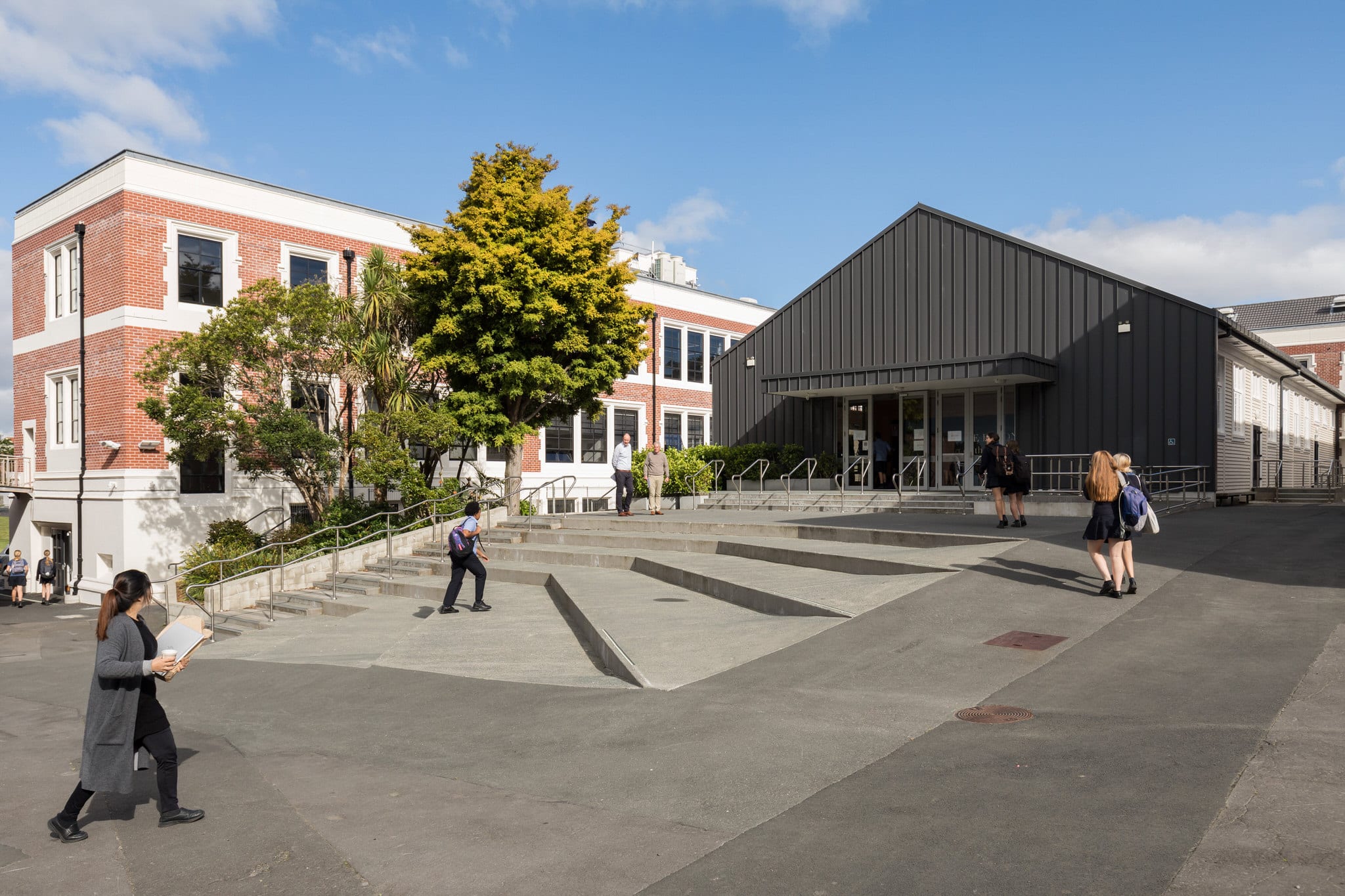 After seven years of hard work, the redevelopment and restoration of the iconic Takapuna Grammar School main block and hall has been revealed. We talk to lead architect Natasha Cockerell and principal structural engineer Cathy Thomas about what’s gone into this massive project.

Prendos and Respond Architects were commissioned to complete the design for the redevelopment of Takapuna Grammar School’s main block and hall in August 2013 and construction began in April 2016. Natasha worked on the project from the beginning, and says it was a real balancing act between remediation, restoration and preservation.

“Takapuna Grammar is one of the oldest secondary schools on Auckland’s North Shore. The main block, built in 1927, is a beautiful heritage building and a well-known, much-loved feature of the school and wider community. Unfortunately, because of structural and weathertightness issues, parts of it hadn’t been used for more than two years. We’ve not only upgraded its structural and seismic standards, but delivered an upgraded, modern learning environment – all while preserving the building’s history.”

Recently unveiled to the public at the grand opening on 16 October, the school’s main block now houses an upgraded administration block on the ground floor and modernised teaching spaces on the top floor, complete with new heating, lighting, ventilation, sprinkler system and huge stacker doors to separate or open spaces as required. The external face of the building is even more impressive, as Prendos and Respond went to great lengths to restore and retain its striking heritage features.

“At 17 metres tall, the historic main block was constructed entirely from 90-year-old bricks,” says Natasha. “These were quite battered and damaged, so each brick was removed, individually cleaned and restored where possible, before being relaid. Where the bricks were too damaged, they were replaced with new matching ‘heritage red’ bricks.”

The cast iron rainwater hoppers that ran down the building’s exterior were original and had to be removed, repaired and resprayed. Because two additional hoppers were required, a mould was made of the originals so that exact replicas could be created. The building’s 130 original steel windows were also reused – each one carefully extracted and sent away to be refurbished, zinc sprayed, painted and double glazed before being reinstalled.

“We added tinted double glazed glass to the windows,” says Natasha, “as the rooms previously got to 35 degrees during summer. The Quality Assurance process for each window required us to come to site and complete three separate staged inspections, so it was a painstaking process!”

One major heritage win is the building’s roof, where the entire parapet – made of lightweight precast concrete panels cast to match the original – was reinstalled to its original height (after being cut down in the 1980s in an attempt to reduce seismic risk).

“With no plans to work from, we researched old photos of the original building. We could see the original parapet was taller, so we’ve reinstated it to its previous height, which is more in line with the traditional architecture of the time.”

“The building was previously strengthened in 1993,” Cathy says. “Today we have a far greater understanding of earthquake strengthening and what’s required, particularly when it comes to brick buildings. We looked at the overall bracing, reinforcement and connections. Because it’s a heritage building, we needed solutions that would last for the next 100 years – not just for a few decades.”

The team found that the building’s original concrete beams were rapidly deteriorating due to water ingress. Up to 120 beams went through a Quality Assurance remedial process, where they were remediated using a specifically developed process. Three engineering inspections were required for each beam.

“The original beams had been made from concrete mixed using sand from Takapuna Beach,” says Cathy. “Over the years, their high salt content had caused them to degrade. Each beam was therefore reinforced and the building restrengthened so that they were no longer load bearing.”

Nearby steel beams were individually wirebrushed back and resprayed. New steel bracing beams were manoeuvred in through the building’s windows, with the biggest ones coming in through the roof. Each beam and junction was different, so each required a different steel plan.

“Because Takapuna Grammar is close to the beach and is therefore exposed to salt air, the steel had to be adequately protected. When steel corrodes it can expand to six times its original thickness – essentially pushing out anything in its path. To avoid this we had to ensure the steel had a decent concrete cover to protect it.”

Floor by floor, the building was meticulously strengthened. Brickwork was repointed, new ceilings were installed, floors replaced, plywood bracing spread across the building, and timber framing installed between the steel beams.

“We worked a section at a time,” explains Cathy, “remediating beams, installing lead cavity trays to catch water and reinforcing and reinstalling bricks. It was time consuming work!”

New bracing and connections were installed throughout the entire building, running vertically from the top through to the ground to transfer any seismic load to the foundations. New portals were also added diagonally to reinforce the building in that direction and better allow for earthquake movement. The building’s bricks, too, were connected and strengthened. ‘Helifix’ stainless steel ties were retrofitted by drilling them into the bricks to hold them together.

“It been a constantly changing project and a real labour of love!” says Natasha. “We’ve collaborated with so many contractors and suppliers and had to work around all the building’s services – water, sprinkler systems, heating etc. The building’s age has thrown us a few curve balls too! During construction, for example, 100-year-old clay pipes were discovered under the floor. We had to stop work so we could design a pile- bridging solution to span over the pipes.

“The job has challenged us in so many ways, but it’s something we’re all extremely proud of – a stunning heritage building that will deliver a really innovative learning environment for future generations.”