A number of the factors that supported the residential real estate market of 2016 remain essentially unchanged at this stage of the year. Overall confidence in the economy remains strong, there is an acknowledged shortage of housing stock, mortgage interest rates remain at historically low levels and Tauranga remains a key satellite city to the identified “Golden Triangle” of Auckland, Hamilton and Tauranga.

However, there are some signs that market activity has slowed. In some regards such a slow down is not unexpected over the Christmas period, but the historic trading pattern of a lift in activity and values over March has not occurred in Tauranga. Local selling agents we have spoken to advise that open home attendance has fallen: “Aucklanders in the main are missing”, and the auction programmes are not meeting with the same level of success on the floor. However, a good number are selling by way of conditional contracts within the month following.

This fall off in activity and limited value recovery over the latter portion of 2016 and early part of 2017 is best illustrated in Graph 2 (below).

Whilst the increased gradient of the graph over February and March for Tauranga seemingly points to a lift in values, in reality there has not been a significant lift at all since June 2016. Interestingly, both Tauranga and Mt Maunganui/Papamoa are tracking BELOW the peak of June 2016.

The changes to the OCR (lifting to 2% in August then reducing to 1.7% in November) along with further constraints to the LVR (particularly for investment purchasers) has seen the market take pause. It does appear that these measures are having an impact upon both home buyers and investors with the resultant slow down in the sale of first home/investment property holdings. 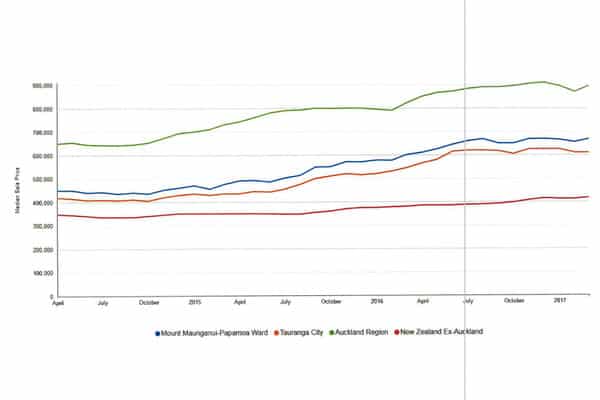 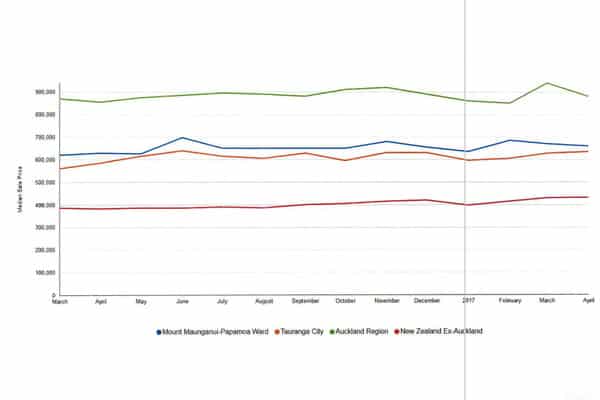 At the same time, dependent upon who you speak to, there is potential for mortgage interest rates to rise at some point. However, coming on top of the current very low rates available, these would need to see a significant rise to severely impact upon activity or values.

We are mindful that the overall cost of finance is not entirely under “our” control. Much of the mortgage finance is drawn from off shore and off shore factors can speedily impact upon our New Zealand cost of funds.

At the same time, given that much of the residential sales activity over the past one to two years has been highly geared, any rise in mortgage interest rates could have an impact on buyer’s viability to retain their investment.

There are other external factors, the impact of which are incredibly hard to define and their likely impact upon New Zealand is hard to gauge with there being very diverse opinions depending upon which “voice” one might hear.

Certainly the Brexit dance is only now coming into the spotlight, the first 100 days of President Trump has given us (here in New Zealand and elsewhere) little to rejoice in – rather more to be concerned and confused about!

And now we have an election looming. This is an election in which the government coffers are “apparently full” – so who knows how much and in what direction the money will flow? In my experience, in the lead up to an election, the market tends to go on “hold”. Both before an election, as promises and policy are examined, to see what bearing they might have on personal incomes and strategies that might be mooted to stimulate/or maintain the economy. And post election (after any partying) there is a further assessment period for the market to see the shape of the new government and dependent upon the nature and “colour” of the government – the likelihood of policy coming into effect.

In summary, if there was ever a time to be very deliberate when considering the next property acquisition, it is now. There may be “bargains” come to light in the next while – but the fundamentals of cash flow and serviceability, the ability to add value by way of refurbishment etc. need to be carefully weighed. In the months ahead prudence and wise counsel could be our best friends, covering our backs if things go “pear shaped” or pat ourselves on the back, if activity and values march steadily on.